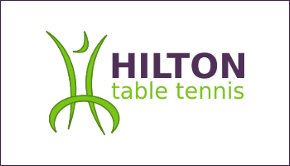 All past and new teams are invited to apply to play at the Hilton Table Tennis Centre for the 2017/2018 season. Four courts are available on Monday, Wednesday, Thursday and Friday evenings. The team fee per season remains at £141.00 which includes all league and cup matches. Please register your

Both first half and second half sessions are now full. Summer League Commences on Wednesday 10th May 2017. First Half session 7 – 15 pm, Second Half session 8 – 15 pm approx.

The Summer League will commence on Wednesday 10th May 2017 and run for ten consecutive weeks, Click on Summer League on the headers and Summer League 2017 for further details.ONLY FOUR LATE SESSION PLACES NOW AVAILABLE

Hilton coach, Mr John Barker, was presented with the Rupert De Riggs Plate, which is awarded for outstanding help given to junior players. John follows numerous Hilton coaches who have received this award over past years.

1) Those attending were thanked for their contribution over the past year. It had been a good year with increased numbers playing both socially and competitively. The junior coaching sessions continue to attract new players and the two junior teams who competed on the Bolton League enjoyed an excellent season.

Development plan, the next five years

Hilton Table Tennis Centre. Development plan, the next five years Introduction The Hilton Centre’s root date back to 1995 when the Bolton Table Tennis League was given a 25-year lease on the Hilton Community Centre by Bolton Metropolitan Council to provide a centre for playing table tennis. The centre, with