Places are currently available for new players to attend this starter session.

Three Bolton School students, who attend  junior coaching sessions at the Hilton, have used their table tennis interest to gain elements towards their Duke of Edinburgh Bronze Award. Jei Makino and Siddharth Ranganath have completed their ‘Physical’ element by improving their playing skills and Nathan Donaldson has completed his ‘Volunteering’ element through helping with younger players and being involved in club administration. The Hilton coaching staff welcome the opportunity to enable people to achieve awards.

The two Hilton ‘I’ and ‘J’ junior teams playing in the Bolton table Tennis League division 4 enjoyed a successful season. The ‘I’ team won the division losing only one match throughout the season. They were also runners-up in the Ron Hindle Memorial Trophy, a handicap competition for all division 4 teams. Steven Gao, the teams most successful player also won the Top Ten medal for the division, the division 4 individual championships nd he was also runner-up in the Leagues junior level singles competition. He was also awarded, jointly with fellow team member Jei Makino ‘The Albert Howcroft Trophy’ for the most improved players of the season.

The ‘J’ team also enjoyed success, just beating the ‘I’ team and winning the Ron Hindle Memorial Trophy. Natan Donaldson, the teams top player was runner in the Leagues division 4 championships and was also awarded ‘The Ralph Palmer Memorial Trophy’ for the most promising junior of the season.

Once again a Hilton coach was awarded the Rupert De Riggs Plate, awarded for outstanding help given to junior players. 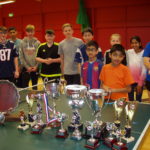 Fourteen year old Sharon Daniel, who is a pupil at Bolton School, has developed her table tennis skills as a sporting element for her Duke Of Edinburgh Bronze Award.

Sharon and Dylan attend the Hilton Tuesday junior coaching sessions and are now able to enjoy playing table tennis with other junior club members. Hopefully they will both continue to develop their playing skills to a more proficient level.

In the past season, due to the number of junior players available two all junior team competed in the Bolton Table Tennis League. Hilton ‘I’ team comprised of four players with previous league playing experience and Hilton ‘J’ made up of players with limited or no league experience.

The Hilton ‘I’ team won 19 of their 22 league matches and ended the season in the runner up spot in division 4. Team member Jason Hill won the division 4 top ten medal for most games won. The Hilton ‘I’ team were runners up in the Ronald Hindle Memorial Trophy, a handicapped competition for all division four teams.

The Hilton ‘J’ team ended the season in a creditable sixth position in the twelve team league, winning fifty percent of their matches. All seven players in this team played a minimum of five matches and all registered wins throughout the season. 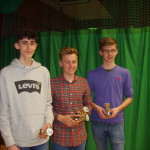 Hilton Table Tennis Centre is proud of its record in providing opportunities for young people to learn and develop table tennis skills through their Junior Coaching Scheme. Since opening the achievement of Hilton Centre coaches and junior players have been acknowledged by the Bolton Table Tennis League. Hilton club coaches have received awards for ‘outstanding help given to junior players’ on fourteen occasions in the past twenty-two years. Juniors who have attended Hilton coaching sessions have received the ‘most promising junior of the season’ award on ten occasions and four have received the ‘most improved player of the season’ award over the same period. Hilton Juniors have gone on to represent Lancashire and the North West at cadet / junior and senior level.

Session 6.00 – 7.30 is for beginner / young improvers. This session is
designed for younger children looking to begin playing table tennis or ones that have already played a little table tennis but want to improve their game. The session is run by Mr Brian Young one of our most experienced ETTA level 2 / UKCC level 2 coaches. Players from these sessions are urged to move up into the advanced sessions once their skills are sufficiently developed

Session 7.15-9.00 is for more advanced players looking to improve and build on the table tennis skills that they already possess. Players in this session start to learn more advanced techniques , competative matchplay skills as well as being given the opportunity to represent Hilton teams competing in the Bolton Table Tennis League.  This session is overseen by Geoff Hall our ETTA Level 3 / UKCC level 2 coach

Equipment, table tennis tables, bats & balls are provided at no extra cost over and above nightly session fee.

The club runs a junior team in the Bolton Table Tennis League. The junior team play all their matches, with a few exceptions, at the Hilton on Tuesday evenings.

Hilton Table Tennis Centre is currently seeking to develop links with Senior and Junior Schools in the locality.